Mistress of the Jewels

This book can be found as one volume or two, with different US and UK editions, which we’ve listed for you below. In this initial volume of The Chronicles of Westria, we are introduced to the country and its people, with a predominant theme of the duality of Light and Darkness. See the Synopsis and Commentary pages for a more in-depth examination.

As for the covers themselves, we feel compelled at this point to point out that authors rarely, if ever, have much say in what appears on the outside of their books. That’s considered a marketing decision, and as such is left to the publisher.

So you’ll forgive us a little commentary… 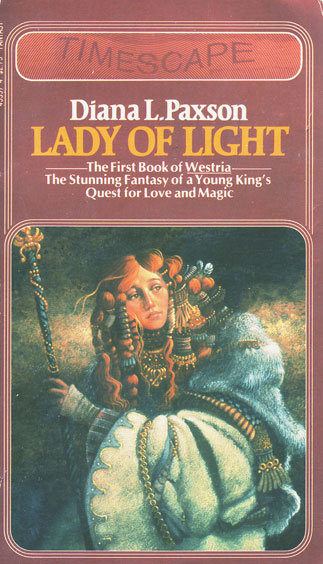 It was the sixth century
after the Cataclysm…

and in the fair coastal kingdom of Westria, the dashing young King set out to find a bride, a lady who could be not only mistress of his heart, but also Mistress of the Jewels.

The Jewels of Westria: whoever could master their mysteries controlled the awesome power of the elements–and ensured the survival of fair Westria.

And in a windswept northern province, a frail girl named Faris, beautiful but meek, humbly hid a secret beneath her cloak and told no-one of the powers she had long felt struggling within her. For she never dreamed she would be the King’s choice.

[The Chronicles of Westria alternately refer to their events as having taken place six or eight centuries after the Cataclysm that swept our current civilisation away. Such wide variances in chronologies are part of the “flavor” of the Westrian universe, and are in no way due to author error. That’s our story, and we’re sticking to it. — Lorrie] 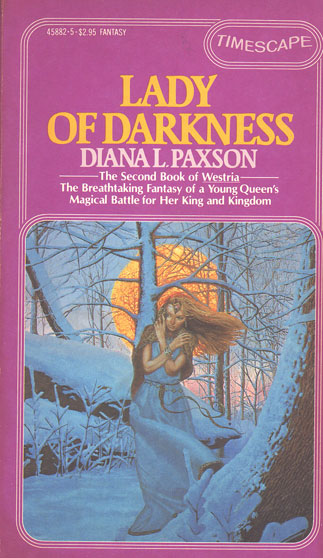 At last, a Queen was
found to honor the Covenant

A Queen to be Mistress of the Jewels of Westria, and wield their magical thrall over the elements. A Queen to conquer the mysteries of the Kingdom, as she had conquered the King’s heart.

But the young and gentle Queen little suspected treachery in the magical spheres of the Westrian court, where jealousy festered and a sorcerer bridled at her powers.

Now her beloved King lay gravely ill, and the hands of sorcer sought to seize the sacred Jewels themselves. Now the Queen alone must battle the Kingdom’s darkest threat since the Cataclysm, as whirlwinds of destruction descend upon fair Westria.

[“Wow! Purple prose to go with a purple cover!” — DLP
“Also, any King or Queen claiming ‘magical thrall over the elements’ would probably get a few Guardians over to the Castle one dark and stormy night wanting to Explain Things with the help of blunt instruments.” — Lorrie 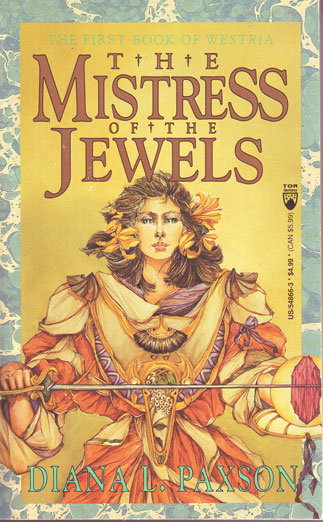 She would be Queen…
but she refused to be a sorceress

The Master of the Junipers looked into the innocent face of the future Queen and spoke softly.

“The mind rules all. Were it not for our belief, this world of forms would not exist at all. You must know this if you are to wield the Jewels.”

“I won’t…I must not wield them…” she replied, thinking with a shiver of her guarded secret, the terrifying intimations of inner power that had tormented her as a child. “Such things should not be meddled with. You cannot understand–there are dark things in me that would be too powerful…”

“No!” The Master’s eyes were bright. “Don’t you understand? The power you fear is not darkness, but light…”

[This, happily, is a good excerpt from the book that actually has bearing on the contents. — Lorrie
Yes, and at least Faris has the right colored hair… but what happened to her waist? — DLP] 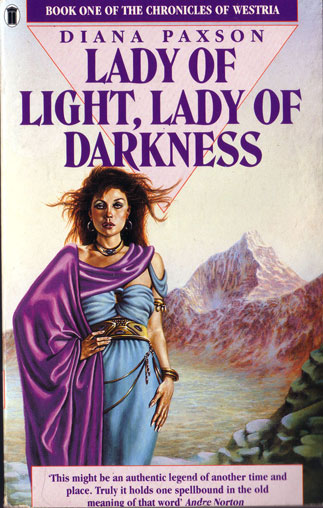 [“Oh… we called that one Lady of the Evening. The UK editor was fascinated by a painting he had hanging in his office, and insisted we use a detail of it for the cover illustration. Unfortunately, this “Faris” has had her eye makeup laid on with a trowel, and looks a bit, um, dissipated.” — DLP
“Yeah, I’d call that ‘rode hard and put away wet’, not to mention what havoc Westrian underbrush would wreak on all those diaphanous veily bits.” — Lorrie] 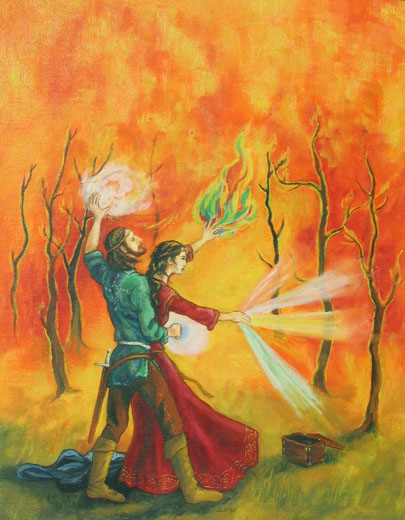 Cover We Wished We’d Had for Lady of Light
In the days before I knew quite so much about How Publishing Works I had fantasies about doing my own covers, and until I sold my first novel and started writing a book a year, I had the time to try. So far as I know, Janny Wurtz is the only author who is allowed to do her own covers. But this painting of Faris and Jehan using the Jewels to fight the forest fire (Chapter XII, Lady of Light) is what I would have offered had I been allowed. — DLP